Posted on October 8, 2018 by kateblackwood

Ithaca City of Asylum supports writers whose works are suppressed, whose lives are threatened, whose cultures are vanishing, and whose languages are endangered. Many writers in today’s world  find themselves in this position–but being persecuted for the written word is nothing new.

Our project is partnering with Buffalo Street Books this month in a display of books by authors who have been persecuted, exiled, jailed, or threatened for their creative work. Books by our writers in residence join books by Nobel Prize winners and bestsellers who share the common thread of writing courageously in the face of persecution.

Stop by the store in the Dewitt Mall at 215 North Cayuga Street in Ithaca, and take a look. 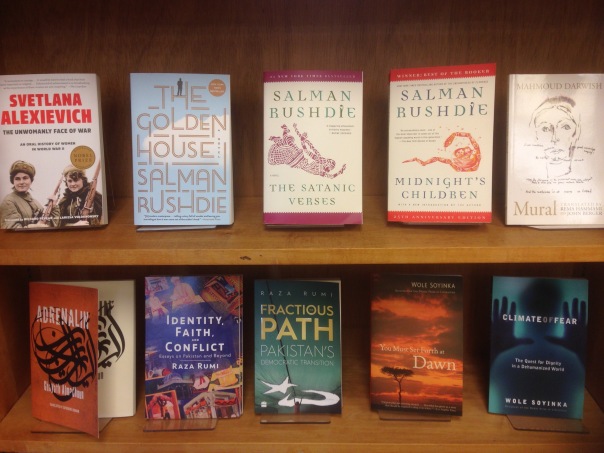 ICOA provides refuge in Ithaca, New York, for writers and artists whose works are suppressed, whose lives are threatened, whose cultures are vanishing, and whose languages are endangered. We also advocate for human rights and freedom of expression. ICOA is an all-volunteer project of the Center for Transformative Action and a member of the International Cities of Refuge Network.

You can attend our events, provide free or discounted services for our guests, or volunteer to join our board. But the simplest way to help is to make a tax-deductible donation! It's fast and easy to give online, or you can write a check payable to the Center for Transformative Action and mail it to Center for Transformative Action, P.O. Box 760, Ithaca, NY 14851. Make sure to write "ICOA" on the memo line.