Posted on February 3, 2020 by ithacacityofasylum 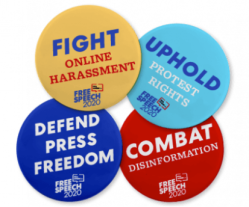 The initiative seeks to promote the public discussion of free speech issues as America selects a new president and Congress. You can follow it on Twitter at #FreeSpeech2020.

Founded in 1922, PEN America works “to unite writers and their allies to celebrate creative expression and defend the liberties that make it possible.”  With more than 100 partner centers around the world, PEN plays a crucial role in attracting and vetting writers in residence for ICOA and other organizations offering refuge to persecuted writers.

You can sign up here for PEN America’s Daily Alerts on Rights and Expression (DARE) newsletter.

ICOA provides refuge in Ithaca, New York, for writers and artists whose works are suppressed, whose lives are threatened, whose cultures are vanishing, and whose languages are endangered. We also advocate for human rights and freedom of expression. ICOA is part of the International Cities of Refuge Network (ICORN).